Earlier today I watched the Felicity McCabe https://www.felicitymccabe.com/a-r-c-h-i-v-e  lecture that was uploaded as part of this weeks lessons. I found the whole lecture enthralling from start to finish, and it gave me so many ideas for ways to experiment and go forward with my project.

It came at exactly the right time as I am due to start my photoshoots of home educating families across Cornwall over the coming weeks for my work in progress this module; so hearing all about Felicity’s colour and lighting usage was perfectly timed for me.

The idea of incorporating still life and landscape was well timed, as it is something I have been playing with the idea of doing in my project, but I’ve been trying to thread together all the seams of how it could work, and the function of it in my project.

I have been considering, trying to capture views of the home environment without any of the family members in the photographs,  landscape shots of the woods for example where a family spends a lot of their time ‘working’ in the woods, & I’ve also been thinking about including some still life shots of educational resources such as pens, pencils, notebooks, laptops etc .

My ideas had been to perhaps look at doing diptychs of the landscape or still life shots along side the portraits, or portraits alongside the documentary photographs of the education in progress, so it was great to see this being done in ‘real life’ by a successful photographer, and that it can work, and work well at conveying a philosophy. I especially liked her description of her work and diptychs with save the children “They want to show a portrait as part of a disaster response …. they are trying to find ways to show more than just a cadaver, they’re trying to show that persons life, to communicate what’s going on with the situation.” I love this way of explaining the decision to use the landscapes and still life to communicate the depth of something, in a way that a portrait can’t.

After going to the Tim Walker exhibition the other day at the V&A, and seeing once again the absolute genius that is an Alexander McQueen creation, I was reminded of the Savage Beauty exhibition I saw at the V&A a few years ago, and rewatched the McQueen documentary last night. I’d love to be able to write lots of profound things about this, but really, it just leaves me in awe. I love hearing about his method of where his ideas came from and how he developed them, especially fitting alongside the Tim Walker exhibition, and last weeks work centring on research methods, and the value of photographic research .

The McQueen show Highland Rape has been a favourite of mine since I saw some of the pieces from it at the savage beauty exhibition, and I have vague recollections of being a teenage girl in the 90’s and suddenly finding lots of fake leather and tartan in topshop ! What I loved as teenage girl was the wild slashes and cuts he used in his work, in an age when everyone wanted to feel wild and untamed these pieces inspired those things on the high street as well . Now, as an adult, and as an artist, I can appreciate the beauty in what he created , the research that went into that collection, the thought, and history, religion and political activism.

What I will never forget in that exhibition though is the centre room of the show, Minnie Melange described in as so ….” The Cabinet of Curiosities: This focal point of the exhibition is akin to a scene in ‘Harry Potter’ – if the young adult film featured a mélange of metal bodices, crucifix motif millinery and Swarovski-embalmed dresses. The centre-piece of this room is from Alexander McQueen’s S/S 1999 collection where model Shalom Harlow rotated as two robotic arms spray-painted the white dress. Hidden among the garments are almost thirty Samsung screens displaying McQueen’s catwalk videography. With more than 120 pieces in this gallery alone, this double-gallery space heralds McQueen’s collaborations with Philip Treacy, Sarah Harmarnee and Shaun Leane. If the walls could talk, this room would narrate an encyclopaedia.” (Burke, Sinead. 13.03.2015. First look – ‘ Alexander McQueen : Savage Beauty.’ http://minniemelange.com/first-look-alexander-mcqueen-savage-beauty/First accessed 09.10.2019 ) I have since ordered the V&A’s accompanying book from the exhibition , as a way to try and remember the lighting, and the structure of that exhibition, because the curatorship in itself was nothing short of artistic genius, let alone the garments within the exhibition. Something that, having a read across the internet whilst looking for photographs for this post, was universally acknowledged by the art world it appears.

As well as the Felicity McCabe interview, I’ve also done quite a lot of reading this week. I ordered the below book “Little Ones” after finding it on the TjBoulting website . I had been looking into their new “BIRTH” exhibition http://www.tjboulting.com/exhibitionspage/512/birth—curated-with-charlotte-jansen and then found that they also ran Trolley books.

I was originally looking as their site was showing that they still had copies of Sian Davey’s “Looking for Alice” available, and although they didn’t, I did come across this beautiful little book by Alessia Bulgari, of images she had taken of children whilst working on location in varying countries. the photographs of the children she encountered on her travels were interwoven with images of her own nieces and nephews.

There were so many insightful bits in the interview that was included, and I have made so many notes on the pages. Although I have been working predominantly in colour instead of black and white this module, I still very much appreciated the tones and feel of her black and white images. This is still something, this discussion, on b&w vs colour that I am struggling with in my own mind. 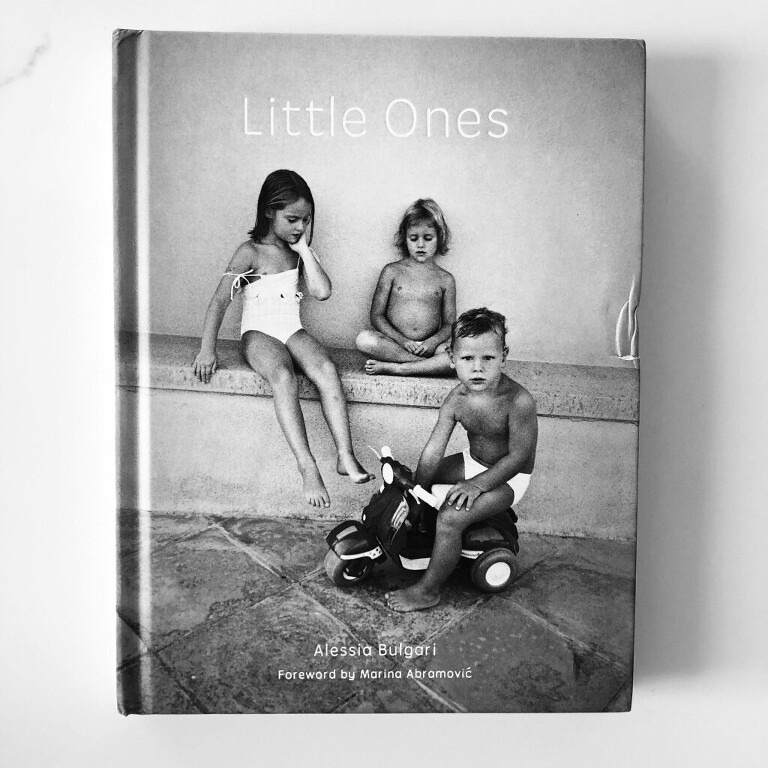 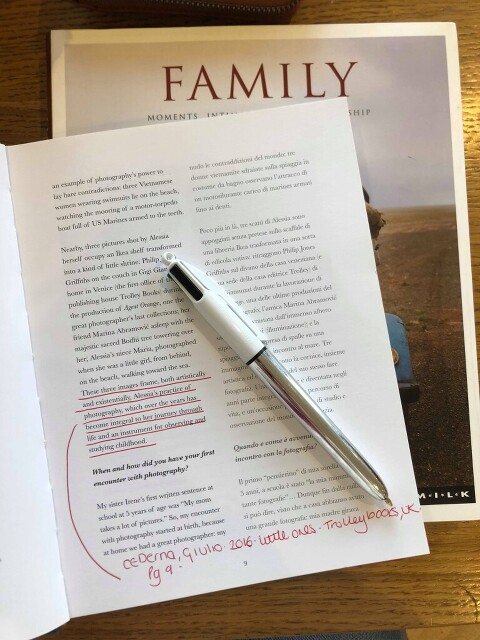 I also went through the book “Family” that my mother picked up for me in a second hand bookshop the other day. Although only made in 2002 the book is already quite dated, in the way it’s text is placed with the images, the fonts and colours used, and the design as a whole. However some of the images are simply stunning as stand alone images, such as the double page spread of a family burying their pet dog in the garden in 1999 by Linda Pottage, or the image by Tamas Kovacs that show a young gypsy boy lying in his coffin after being stabbed by his classmates who claimed he was a racketeer. 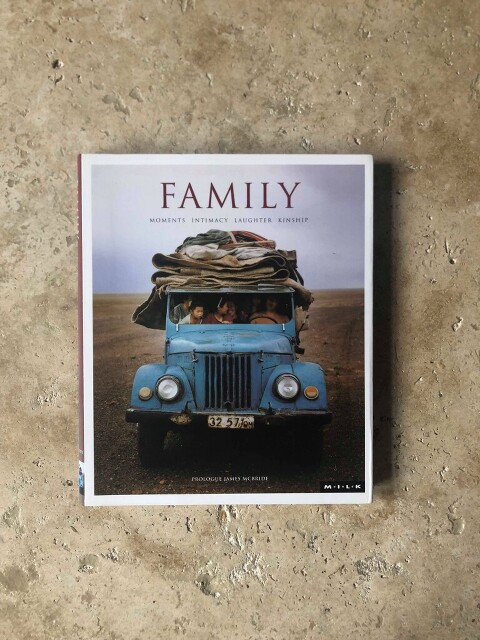