During this module I have been researching a number of photographers who have produced work in a similar fashion to mine, or have been photographing or researching similar subjects.

Sian Davey is a Devon based photographer from the UK, who’s work focuses on her children, family life, and their community.

Her photographic career was launched in 2015 along with the publication of her book looking for Alice which chronicles Alice, Sians’ daughter in their daily lives. Alice was born with Down syndrome and the book ‘Looking for Alice’ , chronicles Alice’s life in their family , through portraits, and their normal every day family interactions and connections.

Each module, and each tutor I have spoken to so far, has asked if I have looked at Sian Davey’s work, partly I think because she is very popular right now so she is in the front of your thoughts, and also partly because, our work IS very similar in terms of subject matter. Her children are not home educated as far as I am aware, but her work focusses on the intricacies and nuances of family life, and the growth and development of her children. I think also as well, living in the same area of England (I am in Cornwall and Sian is in Devon, so both in the South West of the U.K) the colours and tones of our images can sometimes be quite similar.

Something I have found quite interesting is that I have been pointed to Sian twice now as an example of light, and I have to say, although beautifully emotive, stunning images, I don’t think her images are necessarily either the best composed or the best lit, so I have found this quite hard, as I think what you are being pointed too, is not necessarily technical ability, but the ability to have a body of work that is so profound that you look past the sometimes oddly cropped images, wonky composition.

This image for example has, I think , as much wrong with the lighting & crop as right with it (I personally would of included more on the right of the image of Martha, and cropped thereby also cropping the radiator pipe out on the left). There is however, no denying that it is a captivating photograph, like most of Sians work. So we then have to ask, why is that some photographers hold the capability for critics, or the public to look past the technical errors in their work ?

Is it purely subject matter, or is it a case of getting one person to ignore it, say it doesn’t matter, or endorse your work, and then it snow balls?

It may well be a bit of all of those things.

For me personally, the subject of Sians work , and its uniqueness within the art market , as well at it’s beauty is what captivates us. It’s just all so real, and raw, and beautiful, that any imperfections can be easily forgotten, or even become part of the story, and part of the aesthetic. So much so in fact, that we don’t even see them in a lot of cases. Because, I think, when you are telling such an important and deeply personal story, the technical aspect , although great to get right, certainly isn’t, and shouldn’t be the sole focus. I love this quote by Susan Sontag from on photography, and feel it applies to both Davey’s and my own work.

“Photographing, seeing meant an aptitude for discovering beauty in what everybody sees but neglects as too ordinary.” [Sontag, 1977 : pg 89]

For a long time, no-one would of even considered looking at photography within the family home as art, and certainly not work produced by a mother. I really love the fact that this type of work, real life, the mundane intricacies of family life, that millions of people experience is now so appreciated as art. This is obviously very important as like Davey’s work, my project is focusing on the everyday lives of these families, it is just that education happens to be a part of these families’ every day lives together. 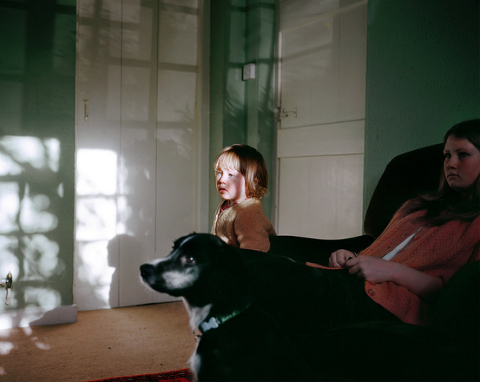 The below image is , I think a beautiful example of Sians work, the colours, and light and the textures shown both in the furnishings, and in Alice’s clothes are all stunning. There is also this beautifully painterly light and quality to the image, it makes me think of the portraits in the NPG in London, whilst the colours and flowers on the cushions & Alice’s sleeves are reminiscent of the pre-raphaelites paintings. 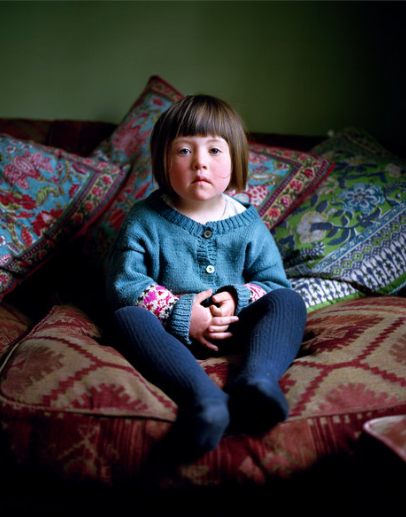 I found Sian’s guest lecture that she did last summer for Falmouth beautiful when I watched it. Her openness when she spoke about her daughters, and their connection, and how strongly and passionately she felt about her work was, as a mother, a beautiful thing to witness, and I found my self not only wishing that I had been at the guest lecture (it was before I started on the ma), but I also contacted Sian to tell her how moved I was by her talk and her images, and received a reply through IG after thanking her for having taken the time to do it.

I actually attended an artist and curator talk at TJ Boulting in London on the 6th November “ We need to talk about birth “ with Charlotte Jansen, and Sian , as an exhibiting artist, was meant to be attending, and I was really looking forward to hearing her talk, but sadly Alice was poorly so she was unable to make it.

Interestingly, Martha was actually attending the event, and I found myself mixed in response, I partly wanted to say Hi and say how moving the images of her were, but I partly felt voyeristic , like we had glimpsed into a world, that wasn’t ours. That was interesting, as I had never been in that position before, and like ever, it kept me mindful of the fact that I am photographing young people, at a stage in their lives where they are maturing, and also within their own homes a lot of the time. As home educators, our houses are our Sanctum, there are far too many of our children have suffered bullying at school from children or teachers, or suffer from anxiety, for me to be complacent about what a huge responsibility and beautiful gift it is that these children and young adults are allowing me into their homes , their safe places. It is an honour that they are allowing me to capture these private moments in their lives , and something I will forever be extremely grateful for.