For each families photoshoot I have done, I have had them complete a model release form . This was to ensure the families understood , to the best that I could tell them, what I am doing, why I am doing it, where I plan on putting the images, and why. what I plan to include, and not plan to include. It then gave each family a section to sign off on their consent to use the images.

A COUPLE OF NOTES ON ADDITIONAL ETHICS

One thing I did do was keep any audio and video recordings I wished to use at the total discretion of the parents. I’ve been so busy I haven’t had time to analyse why, but from very early on it became apparent that I was not comfortable having sole say over which audio and video I used, I felt this was a very subjective thing, that each parent, and family needed to be involved in. I find it very intriguing that I feel this way about audio and visual recordings, whereas the images I was adamant that I had to have total control over which ones I used. I think there are a few reasons for this, one is the fact that audio is a very personal thing. 99% of the audio I took was actually just to help me, and my brain. I have been very ill this module, intact for 9 of the 11 weeks so far I have been on antibiotics, in and out of hospital, and my memory has been horrendous, so I took the audio of the photoshoots as a way of being able to remember what I discussed with parents, so that if anything of specific interest came up I would be able to quote directly. I didn’t do this with all the families, but noticed after the first few that it was not going to work me trying to remember everything, and also I wanted to make sure I didn’t misquote anyone. I had taken a few videos and some of the things I was discussing with the parents were really interesting , this is why I chose to start making audio recordings.

All parents were told, the audio recordings are for me to transcribe and look for specific quotes from, I will not be publishing these on my CRJ for obvious GPRD and ethical, and moral issues, and I explained to parents that if I wanted to directly quote I would find the quote / text and send to them to get individual sign off on the quotes I wanted to use.

I explained I would do exactly the same with video. 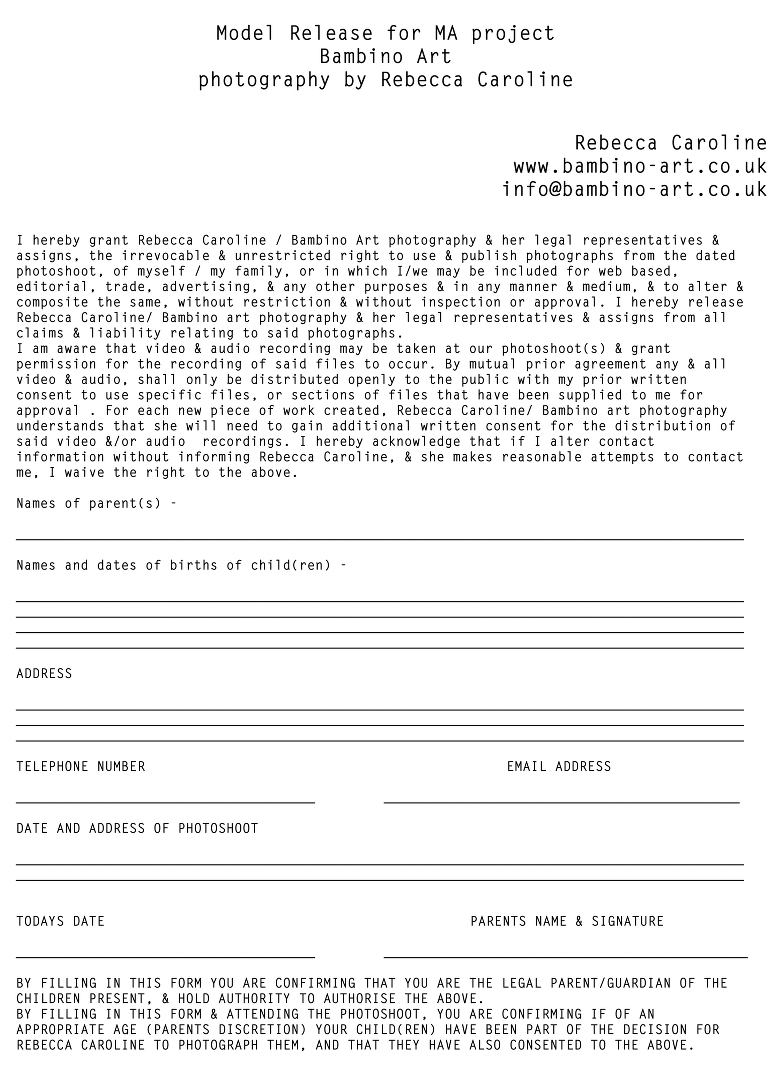 nrecognisable for example, these desires, were of course adhered too.

The template of the model release is below …