In week 4 I did my first photoshoot of this module.

During the first module I photographed the ‘inner sanctum’ of spheres, photographs of our own families home educating journey.

This module I am concentrating on moving that sphere out and photographing other home educators within my local county of Cornwall.  I have got just over 20 families interested in taking part so far , with 13 of them having signed up to dates for photoshoots in the calendar I created for people to sign up too on facebook. I am hoping that across the selection of families there will be a variation of educational methods from radical unschooling https://unschoolers.org/radical-unschooling/what-is-radical-unschooling/ to structured  curriculum based learning at home.

I almost didn’t make this photoshoot after having been so ill in hospital, & I would be lying if I didn’t say it was a big struggle for me both physically & emotionally to of done these images, but I am SO glad that I did. They not only made me forget about being ill for a few hours, but made me start thinking about the possibilities of this project going forward in more depth. What it is I am trying to portray, & how I am going to try portray these ‘philosophies through my images’.

Editing these images, and putting them together to show Laura to get her feedback was invaluable, as it made me see things within the images that I hadn’t seen when I was taking them. It also made me realise how far I have come in my critical & contextual awareness  in such a short amount of time, as there are metaphors contained within these works, that I discussed during the webinar, that I wouldn’t have noticed even a few weeks ago. I can only imagine this awareness, and new readings, will continue to evolve as I place these images along with other images from the series as it progresses.

I had a really good webinar this week with Laura and a couple of other students , where just through discussion I was able to see more in these images again, and both Laura and the other students saw things within them that I hadn’t intended in some instances, or noticed in others.

One thing that did strike me was how this module I have been working practically solely in colour. Is this because I was advised to try it last module? Partly yes, but also , as I explained to Laura, last module when I was photographing our own children the black and white was conveying something that I was feeling within myself at the time, and these images are at their core about a feeling. An overwhelming desire, or feeling to take a different path. The path to home educate is not just a choice, a lot of it is instinct, instinct that you are making the right choice, instinct on how to progress and move forward, it is this instinct, these feelings, and battles within ourselves that I am also trying to capture. The images are images of each individual families’ journey and methodology, but how the images are captured, and especially how they are culled and edited and presented, are illustrative of my own feelings and emotions about our own personal home education journey. They are both open and shared, and intensely private and personal at the same time.

Again, we go back to Susan Brights, submergence of the mother, of the artist, within her work.

Some of the things I noted was how I was drawn to the daughters sylvanian families doll houses, and world she was creating when I arrived. Initially it was because when I was a young girl, I was never ‘allowed’ a barbie. All my friends had them, but my mother never let me have one. Back when barbies were still cool and not seen as corrupting the minds and mental health of our young ones, my mother made the choice that this was negative. She never really explained it to me, or at least if she did I don’t remember, I just remember being so peeved that my friends were allowed them and I wasn’t. Instead I got syllvanian families (which I adored by the way !) So when I walked in to the play room and saw a whole sylvanian city I was overjoyed. When I came to look back through these images though, it occurred to me that I wasn’t just capturing a little girl playing, building, representing her world, and making sense of the world she inhabits. What I was capturing, what I was doing with my angles, lighting, decisions to capture these moments, and engage with this subject was capturing my own thoughts, feelings, obsessions, and compulsions around home education. That the house represented my own obsessional need to micromanage every aspect of our own families lives, that within our home, I am the little girl ‘playing house’ moving everything around, fitting it in it’s place, making it look just so, and feel just right. An oddly liberating, and traumatic realisation all at the same time. 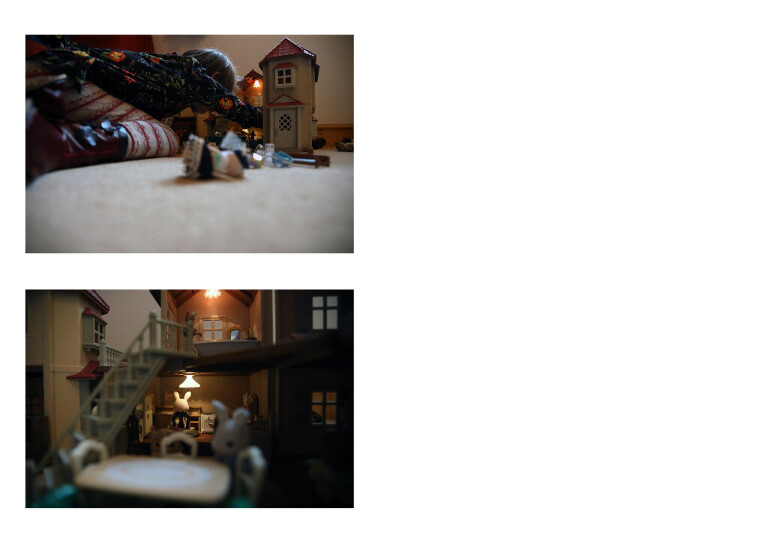 The next thing we discussed were the lego pictures. It occurred to me that what I was photographing here was again my ocd. My youngest Oska is friends with the little boy in this photograph, and we actually went round for a playdate a few weeks ago. Oska excitedly told me all about A’s lego, and how he was desperate to go back again to play as soon as he could. When I saw A’s room I instantly understood why. This image is a physical photograph of A’s personal space, his creative environment, his most prized procession. For me though, the choosing of these two specific images and the placing of them together represents what oska felt that day, I think. Oska has basically as much lego as you see here, but all in boxes, all neatly packed and controlled. For him, this is freedom, creativity, excitement, it is what it is, stifling control. Oska was excited, because he recognised this lego held something his lego didn’t. Thats quite a sad realisation for me really. The choosing of these images, and the choice to display them together, is a representation of both that stifled creativity, and my fears or OCD 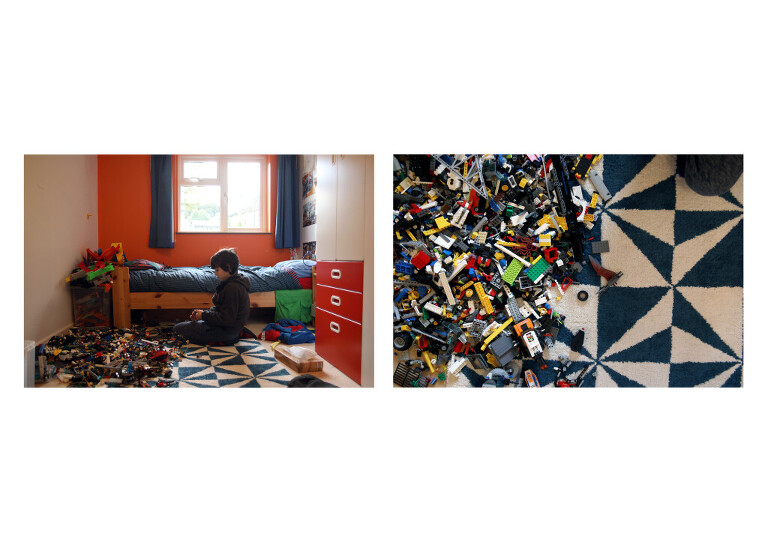 I then went on to show the below images which capture A & L’s more structured learning that they do in the mornings. English and maths curriculum followed by a board game. I have to admit I felt shamefully inadequate in my own home educating skills seeing what these guys were doing. Something I am sure will continue throughout the project, but on a personal note it gave me ideas for things I would like to try with my own children, and that is something I am hoping comes from this project. That parents will see these images and be both inspired and intrigued by them as well as supported. They are not meant to be an instructional guide, but if they inspire and give ideas great. 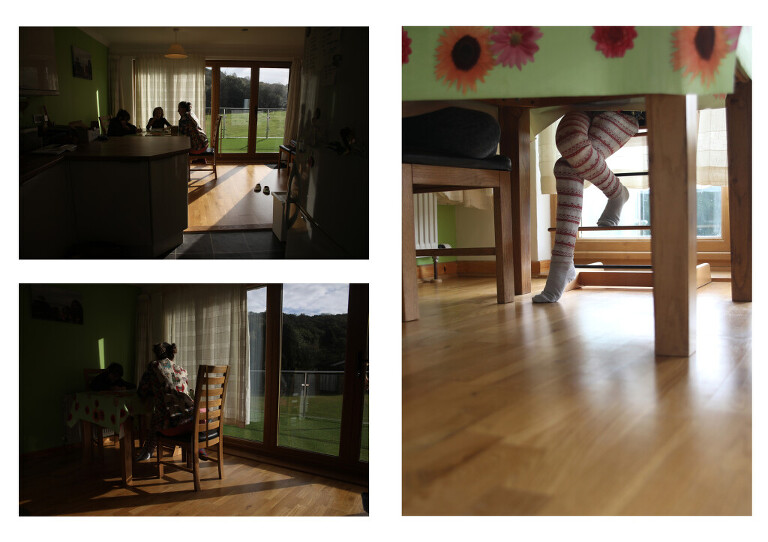 The light in this room was nothing short of divine. One thing I spoke on during the webinar presentation was how to me, these images apart from representing this families own individual way of educating, unique to them, personally to me represented my own internal struggles with our choices. Not the choice to home educate, that isn’t even a choice anymore, it is such a certain in our heads, but I mean the choices we make as to how much of our education is structured, how often I allow the children to have electronics, how much of their work is online weighed up against in workbooks, against practical ‘hands on’ learning. It is a constant struggle and battle for me within our own journey, this light and dark. the shadows in your mind that make you doubt and think you are getting everything wrong, and that chink of light at the end of the tunnel that shows you there is a path, there is a way, there is light, if only you keep moving towards it. 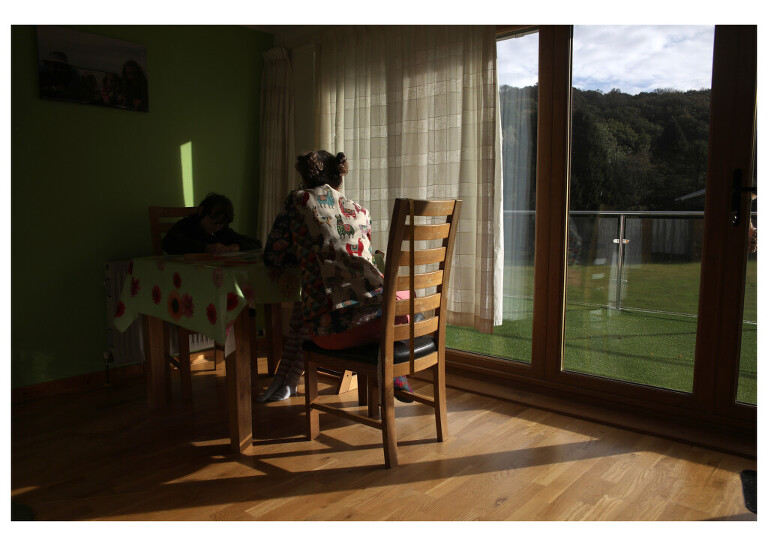 It was Laura that pointed this next revelation out to me. A was undertaking his maths work at this point. I personally, was drawn to the colours, and depth int he image, the chink of light. Laura said it was interesting how the whole of each of the images was so geometric, that I had almost captured the maths that was happening in this image via mathematics itself, and that also the geometry of the scene and the things within it were almost submersive.

This was a very intriguing prospect for me as with home education we talk a lot about submergence in the learning, and once Laura had pointed this out, I couldn’t stop seeing it, it is now blindingly obvious. But this begs the question, how much can you take the credit for happy circumstance within your image? I framed, composed, lit, culled, edited, and put together this diptych , but I didn’t place the things on the table, or choose them for that matter. I didn’t make A’s glasses the only spherical ‘prop’ within this shot, or make him sit in a way that showed that triangular section of chair, made up of rectangles, crossed over with that patch of light. I saw the light, loved the light, composed for the light, lit for the light, but the rest ….. 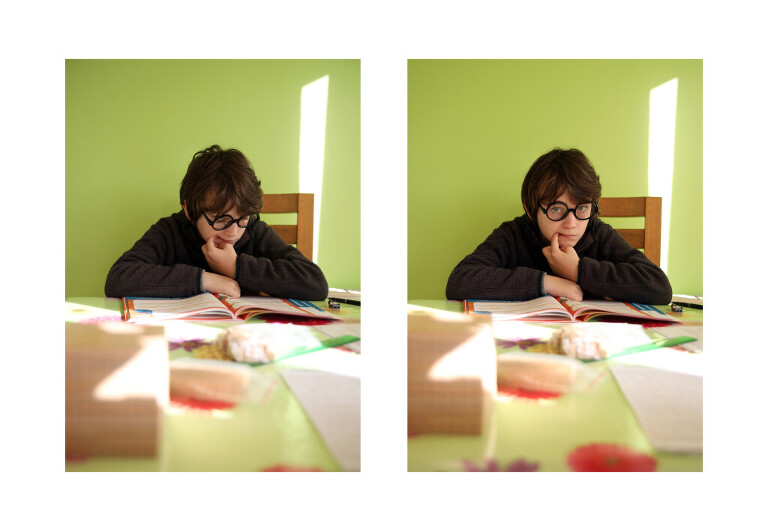 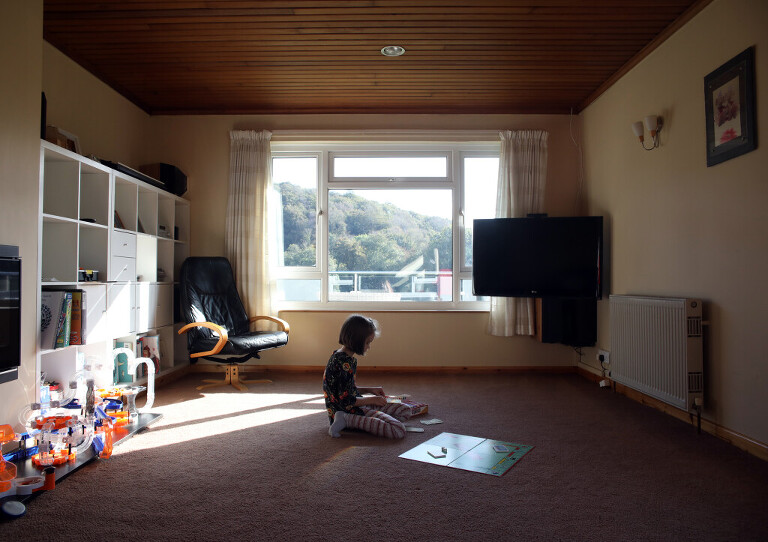 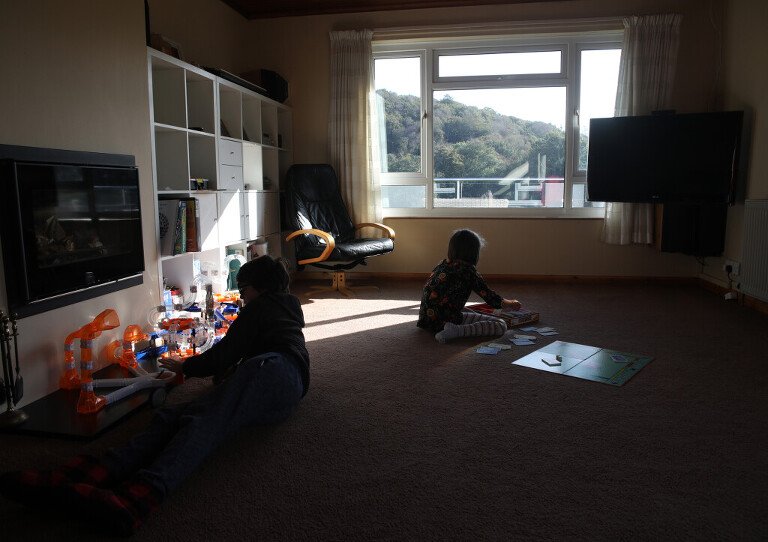 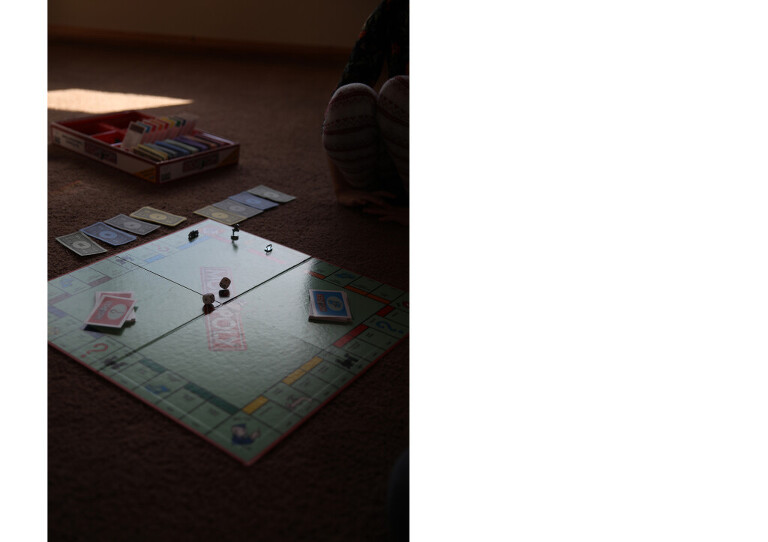 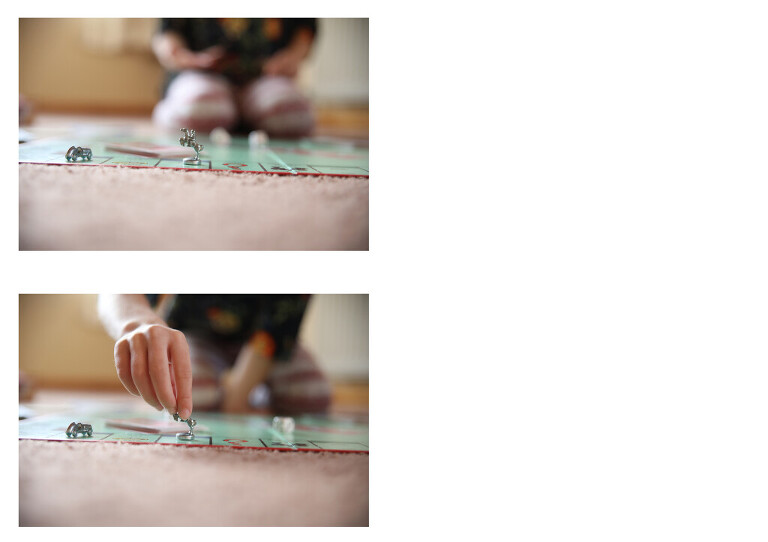 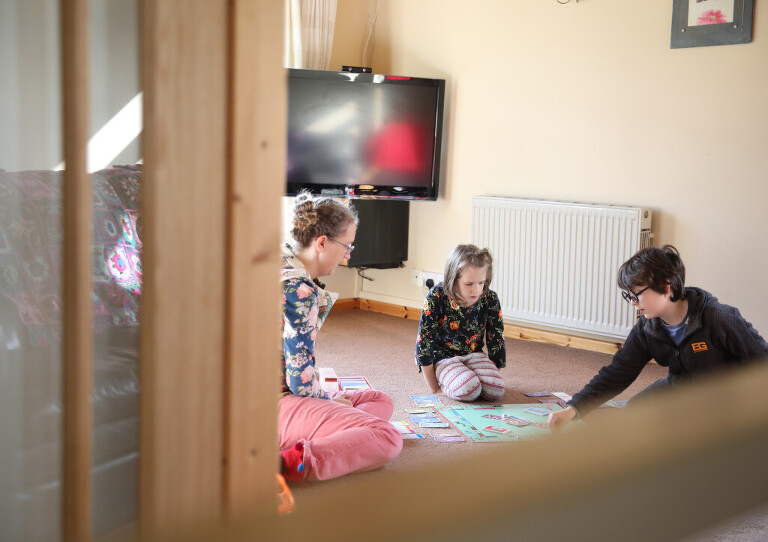