Am I really just photographing motherhood ?

The depiction of Princess Carolyn’s struggle with early motherhood, and all the balls she is juggling in the new series of Bojack horseman that just aired on Netflix , is nothing short of genius. It is literally every mother, ever , trying to do everything, for everyone. Never have I felt such an affinity with a cartoon character!

*** EDITED TO ADD 05/12/19….Which led me to ask the question. Am I actually just skirting around the ‘bigger’ issue here? Am I really just photographing motherhood but through the eyes, of home education this time? Is that really so different to me photographing birth through the eyes of myself, as someone who has suffered birth trauma , or me photographing pregnancy and pregnant women, as someone who is totally obsessed with the physical and emotional morphology of pregnancy? Is what I really want to be doing here, photographing these mothers stories, and not necessarily their children’s ? It’s a HUGE sacrifice as well as a huge overwhelming joy and honour to be able to home educated, is that what I really want to capture?

In episode 2 of the new series on Netflix, we see Princess Carolyn trying to comfort her crying baby, run her business, organise parties, all whilst trying to deal with the pressure of picking out a name for her newborn . The depictions of the various tasks Princess Carolyn has done, is doing, or needs to be doing, is presented as Princess Carolyn in multiple carbon copies of herself but  in various shades and transparencies, doing different tasks. It is a visual delight, and something that could inspire the most awesome photoshoot, with multiple exposures, and given I am planning on doing some more staged tableau shots during this project, and I have been toying with the idea of photographing the ‘expectations vs reality’ of home education, it is definitely something I could be incorporate into a photoshoot like that . Before the show ends you are kept on the nail biting edge of your seat with the repetitive crying of her baby, and other repetitive audio, as well as the stifling, and claustrophobic amounts of Princess Carolyn that keep appearing, the scene in the car below where she is literally cramped into the car with all the versions of herself along with her ‘still’ crying baby, is totally inspired, and something I think, most mothers I know could relate too. *EDITED TO ADD 05/12/19 I DIDN’T DO ANYTIJG WITH TABLEAU THIS MODULE BUT DO STILL PLAN TOO AS I REALLY LIKE THE IDEA, AND AS MUCH AS I LOVED THIS MODULE, IT WAS SO HARD ON ME PHYSICALLY, AND MY CHILDREN EMOTIONALLY WITH ME BEING SO ILL AND SO BUSY, THAT I THINK A MODULE OF STAGED TABLEAUS WHERE I AM ONLY SHOOTING ONCE EVERY COUPLE OF WEEKS WOULD BE PERFECT FOR ME. STILL LOTS OF WORK TO ORGANISE, BUT LESS PHYSICAL SHOOTING. 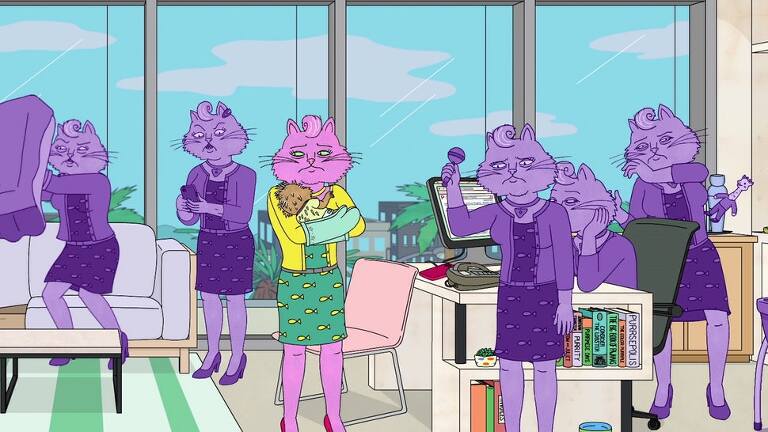